The Big Ball of Wax by Shepherd Mead

A Study of Tomorrow's Happy World

A Satirical Novel of a... Boring Future? 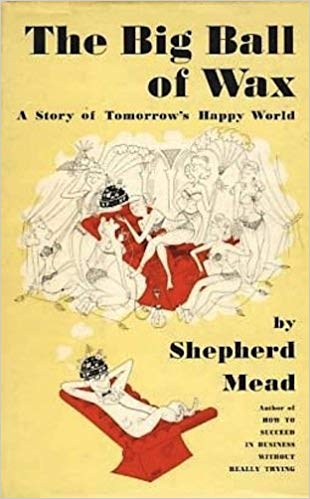 I have a hard-cover first edition (with the yellow cover) of Shepherd Mead's "The Big Ball of Wax" (1955). I first read about it in research for my doctoral dissertation and found it a few years later in a small used-book store in Europe.

There are two types of novels about the future: utopia (everything is wonderful) and dystopia (the future is horrible.) There are only a few utopia novels because those are boring. There are plenty of dystopia novels, because they make for good reading (and great movies) due to action and suspense: that has monsters, hero, slaughter, victory, etc.

But is there a third type of novel about the future? Mead's "Big Ball of Wax" is practically the only example of a third type: the future will be mediocre. This is a future where marketing discovers the perfect marketing tool and turn people into slobbering babies, constantly feeding their primal desires (i.e., food, sex, fast cars, and shiny junk).

Mead's book, written in 1955 and set in the futuristic mid-90s, had many original ideas for its time: organically raised vegetables, telephones in the car, voice dialing, big-screen TVs in restaurants, audience voting during TV shows, televangelists, graphic novels, video calling, self-driven cars , videotape, virtual reality, electric cars, and the disappearance of the USSR. Several times in the book, people refer to printed books as the "old-fashion type" of book (like many do today). He also has ideas that we don't yet have: such as holograms in the home.

He didn't foresee cell phones, desktop computers, or tablets (the first tablet, identical to an iPad, was in Stanley Kubrick's "2001 Space Odyssey" (1968).

A major idea in the book is Momsday, an marketing-driven holiday for shopping and gifts. In the 60s and 70s, Mother's Day was an innocent day for a card and perhaps flowers for mom. It was nothing like what it has become today: primarily a marketing and sales event, just like nearly every holiday.

This is Mead's horrible future: marketing will satisfy every need, and the population ends up in a bland, mediocre future. Once that happens, there will never be any more development, no more future. Marketing is the end of the future.

If you're serious about literature, dystopia, social criticism, or science fiction, get this book. It's a very rare butterfly: a unique novel.

There are no printed copies on Amazon (or anywhere) but there is a digital version (for Kindle) for free.